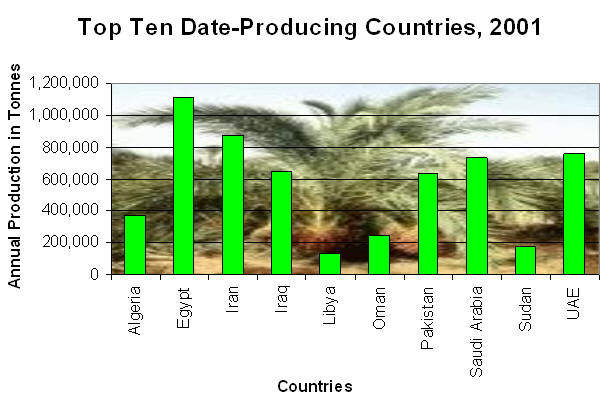 Use full answers to the sentences above to form the basis of your three-paragraph essay. Then write a short description of the information in the chart.

Before you write, try this exercise.

Find ONE error in each sentence below, then order the corrected sentences to make a model essay.

The graph reveals information on the top ten date-producing countries in the year 2001. Each unit is measured in tones.

Apparently, it can be seen that the manufacturing industry in Egypt recorded a successful year with as many as 1,100,000 goods being produced, closely followed by Iran with just well over 800,000 products at the same time.

The second biggest group includes UAE, Saudi Arabia, Pakistan and Iraq, whose figures were consistently above 600,000. In fact, the number of goods produced in Saudi Arabia and UAE was even just a little under that of Iran (ranging from 650,000 to around 670,000, respectively).

Another striking feature is that the year 2001 seemed to be a failure to 4 remaining countries (Algeria, Libya, Oman and Sudan) as their proportion of the products were always less than 400,000 with Algeria experiencing the highest number of approximately 380,000, or one third of Egypt.

In short, the graph may well reflect the differences among ten date- producing countries during the year 2001 . It is clear that while some countries recorded a harvest year, others might not develop well (195 words).