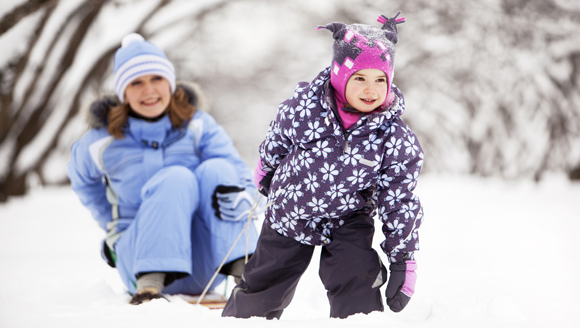 Esme: I love looking at the snow, but it looks cold outside. Maybe I’ll stay inside today.

Mirta: But the sun is shining, and you have a warm coat, so let’s do something outside. How about we go ice skating?

Esme: That sounds fun, but I don’t have any ice skates. How about we go snowboarding instead?

Mirta: That’s a great idea, but the closest place to snowboard is an hour away.

Esme: Oh. Well, do you want to go sledding? I have a great sled.

Let’s plus a verb is a way of suggesting doing something with one or more people. “Let’s” is a contracted form of “let us.”

When you use how about at the start of a question, it can be a way to make a suggestion.

Ice skating is the activity of using ice skates to move on ice.

Ice skates are a type of shoe/boot with a blade on the bottom for moving across ice.

That sounds … fun, great, bad, etc. is a way to reply to an idea or suggestion.

Instead is used to suggest another choice.

Sledding is the act of riding on a sled down a hill.

A sled is a vehicle used to travel over snow. It has a flat bottom or narrow metal strips on the bottom to help it move over the snow. Children often use sleds to move quickly down small hills covered in snow.